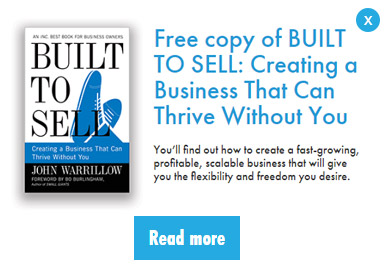 9 Principles Of Solid Businesses – 1. Start With The End In Mind

Why did you start your business? Business owners start their businesses for a whole host of reasons. I have come across people who have started their business when:

For many business owners, that initial reason for starting up is wrapped up with a sense of having more freedom. That could be freedom to make their own decisions, take their own risks. Equally it could be the freedom to work where and when it suits their lifestyles.

Unfortunately, for far too many business owners, that freedom doesn’t come in big measures. That work / life balance is always round the next corner. There’s never enough money to buy free time. The business demands more time and effort than expected. That freedom to make decisions turns out to be regularly reacting to problems that seem to get in the way of growing the business.

And that probably describes the world for many business owners, call them ‘typical owners’. Especially with COVID and a recession, they are aspiring just to survive.

But there are some business owners who aspire for more. The research done by the folk at The Value Builder System, shows there are owners, let’s call them ‘value builders’, who apply 9 principles of business that build solid companies and personal wealth.  Over my next few blogs I will be looking at those principles in greater detail.

Principle 1: Start with the end in mind

This first principle follows on from one of the famous 7 habits of highly effective people published back in 1989 by Stephen Covey.

Covey encouraged us to think about what we want in the future so we can work and plan towards it. Do not just act, too often the status for business owners, but think first.

So, when you started your business what was the end you had in mind?

The problem with that last answer is that time and stuff will get in your way. Eventually, events outside your control will face you to make a decision. All too often that doesn’t give its best outcome.

Let’s look deeper into that penultimate end in mind, selling to an outside buyer.

Selling To An Outside Buyer

Those ‘value builder’ business owners I referred to earlier understand the difference better, including the roles of strategic and financial buyers.

The financial buyer purchases a business in return for a stream of profits; they are buying your future cash flow. Since most small business acquisitions are made by financial buyers that are merely looking for a return on the cash they invest, they often pay much less than a strategic buyer.

The strategic buyer is acquiring a business for what it is worth in their hands. They have a set of assets that are made even more valuable through the acquisition of the target company. Your business may be strategically valuable to another for a lot of reasons, but here are some of the most common.

Owning your company will allow a strategic buyer to:

Even though you may be years away from selling, make a list of potential strategic acquirers for your company. Consider major strategic decisions through the lens of their impact on your list.

Here are 2 examples of owners who started with the end in mind and sold to strategic buyers.

From Cucina to a Michelin Star

The first, Steve Quinn, is a personal friend and client. Steve is a great chef, believe me – I’ve experienced his cooking! His big picture end in mind has always been to have his own restaurant. But his career in school catering for Compass Group wasn’t getting him there. Redundancy forced Steve to exercise his ‘risk muscle’ and he set up his own school catering business.

Cucina became a specialist school catering business, doing things the way Steve wanted. He now had the route to funding his own restaurant. Steve sold Cucina to a fund manager and strategic partner, creating the Impact Food Group.

Steve opened the Oxford Kitchen back in 2018 and won a Michelin Star. The COVID pandemic has encouraged Steve to think again. He has shelved his Michelin Star and rebranded as Two One Five Kitchens and Drinks, a neighbourhood restaurant at 215 Banbury Road, Summertown, Oxford.

Steve’s full story is available in an earlier blog if you’d like to read more.

The second example comes from John Warrillow’s Built to Sell Radio, a regular podcast revealing the stories and advice of business owners who have sold their businesses.

John spoke to Steve Murch, founder of VacationSpot.com.  Well before the explosion of Airbnb, VacationSpot.com connected travellers to private vacation homes. Steve needed to solve the chicken and egg problem. Attracting travellers needed a good range of homes to rent. Owners would only list their homes if there was enough traffic.

So, Steve partnered with Expedia giving it 20% of his equity. Steve’s end in mind was to sell out to a strategic partner like Expedia.

Three years later, when VacationSpot.com had grown much bigger, it was brought by Expedia for $87 million.

So Why Did You Start Your Business?

So now you’ve had time to consider the above, I will ask you again…why did you start your business? And are you working to towards the end you have in mind?

No doubt that’s given you some food for thought so why not find out where you are in your business at this moment in time? Take this short assessment to give you a clearer picture of where you’re at and what you need to do to reach your end goal.